The Scientific and Spiritual Success Story of Israel’s Lunar Mission 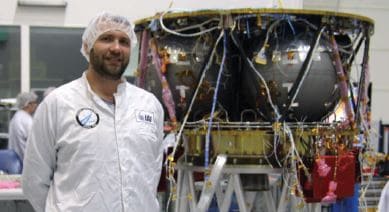 The Scientific and Spiritual Success Story of Israel’s Lunar Mission

Although it did not have a “soft landing,” Israel’s lunar mission in April was still a tremendous accomplishment, as it made the Jewish state only the seventh nation to orbit the moon. Moreover, the Israeli nonprofit SpaceIL achieved lunar orbit through the Beresheet spacecraft while working with what experts widely considered a shoestring budget of $100 million.
JCT graduate Ariel Gomez, a senior system engineer at SpaceIL, played a major role in making this historic moment a reality. Not only was Ariel responsible for keen components of the project, but he was also involved in the research, consultation and technology needed to minimize the violation of Shabbat while simultaneously ensuring the continued safety of the spacecraft. Gomez consulted another JCT graduate — Rabbi Shraga Dahan, former head of the IDF’s Beit Midrash — regarding how to operate Beresheet on Shabbat.

“The head of staff of Beresheet is a Chabad chassid and avoiding the violation of Shabbat is very important to him,” Gomez said. “In our contract with the American company, there’s a clause that the launch won’t take place on Shabbat.”

He continued, “We saw Beresheet’s mission as a mission of the entire Jewish people and therefore it was very important to us that there won’t be any procedures on Shabbat that were not approved by the Chief Rabbi. We used technological innovations that were designed by JCT and the College provided us with keyboards and mice which can be operated through a grama (an indirect action which involves a less serious violation of Shabbat). Additionally, we instructed the staff to do only what is strictly necessary to ensure the safety of Beresheet on Shabbat and no more.”

Rabbi Dahan said that “working with the staff of Beresheet has been a wonderful experience. I feel that I’m dealing with heavenly matters in the double meaning of the word. Witnessing Jewish people working together on the project has been a very meaningful experience. We can truly be proud of the Jewish nation.”

Earlier this year, Jews in Israel and worldwide bubbled with anticipation as the Israeli non-profit SpaceIL’s Beresheet spacecraft prepared to land on the moon.

Why is this important? Aside from the scientific research that can be accomplished through space exploration, the Torah lends insight into another very significant issue associated with Israel’s moon mission.
The pasuk in Vayikra 26:13 states: “I am the L-rd, your G-d, Who took you out of the land of Egypt from being slaves to them; and I broke the bar of your yoke and led you upright.”

The Targum Yerushalmi explains that this pasuk conveys the importance of standing upright.

Before the modern state’s establishment 71 years ago, Israel was at a low point — a mockery and a joke throughout the world. Today, B”H, Israel is standing upright. The State of Israel, the IDF, and all of Israeli society produce immense technological and even spiritual success stories. Products pioneered in the “start-up nation” are used worldwide. JCT has played a major role in developing these significant and even life-saving technologies. And we had the privilege to be a significant part of Israel’s historic lunar orbit through the participation of our graduates in the mission. This is important in itself, but especially when it is rooted in Torah.

Indeed, our job is not to feel that our scientific achievements stem from human power, but rather to acknowledge that G-d is the one who gives us the strength to succeed. To appreciate the help of Heaven is to embrace our mission — a national mission, a human mission, a mission of Torah, a mission of mitzvot.

When Israel eventually attempts another lunar mission and succeeds in landing on the moon, it will represent another stage in the elevation of the Jewish people, another stage added to the glory of the Kingdom of Heaven, and a further strengthening of the course of our redemption.
Rav Yosef Zvi Rimon, Rosh Batei Midrash, JCT