They came to give love and they found love.

Ariel and Moriah were married on October 11, 2018 at Ramat Rachel in Jerusalem.

erusalem — Ariel Tobul and Moriah Siesel, now both 22, met when they were both 19-years old and were volunteering at the Shalva Center in Jerusalem. Shalva is a non-profit based in Jerusalem that inspires hope and changes the lives of people with disabilities and their families. It clearly transformed the lives of Ariel and Moriah.

Ariel started to volunteer at Shalva when he was an eleventh grade student at a yeshiva in Dimona. With pride, Moriah notes: “Ariel would travel three hours each direction and would make the trip every Tuesday.” Ariel adds: “That was the swimming day for the kids and they needed me. Also I wanted to be there.”

Over the next two years, he came to volunteer several times a week. Though his family lived in Jerusalem, Ariel sometimes spent Shabbat at Shalva with “his kids,” as he refers to them. Ariel comes from a family where giving is a given. His brother and sister had also volunteered at Shalva. They all support Shalva’s mission, which is to provide transformative care for individuals with disabilities, to empower their families and to promote social inclusion.

Moriah and Ariel met in 2015, when Moriah came to Shalva in her second year as part of her sherut leumi, or national service, which she chose to participate in instead of joining the army. She was assigned to the same team as Ariel to work with a group of 13 year-old boys.

Before they met, Ariel had heard about Moriah from her friends, with whom he had worked at Shalva the previous year. Ariel smiles: “They actually put the bug in my ear.”

Moriah clarifies: “But there was no special relationship between us that year. We were very proper in our working relationship, and when we’d go out, it was always with a group, never alone.” At the end of the year, Ariel was drafted into the army.

Still, he came back to visit for the Shabbat of the Shalva summer camp in August, 2016. Moriah claims: “He came to visit me.” Ariel responds: “Yes, to meet up with Moriah and to visit my kids. Shalva is like a family. You want to maintain your connections.”

That Shabbat was the turning point for the couple. Afterwards, they started going out just the two of them, even though there was no actual first date. They agree: “Our relationship was spontaneous. There was no official wedding proposal, but we knew where we were headed.”

Moriah continues: “From the beginning, it was clear that we shared the same values. And when we worked together, I could see the different layers of his personality. I especially appreciated Ariel’s compassion and patience. For example, how he ran the Jerusalem Marathon while pushing a wheelchair-bound child.” (Note: In the 2019 Jerusalem Marathon, Shalva had the largest representation – over 600 runners from around the world.)

After finishing her time in the National Service, Moriah remained at Shalva to work for another year. “Because of Shalva, I decided I wanted to become a nurse. Beforehand, I was undecided.” Today Moriah is a nursing student at the Tal Campus of the Jerusalem College of Technology.

Ariel and Moriah were married on October 11, 2018 at Ramat Rachel in Jerusalem.

Note: More than 100 young people have met their beshert (soul mates) while volunteering at Shalva. Their names are inscribed on a plaque at the entrance to the Shalva National Center. They came to give love and they found love.

Dr. Leah Hakimian currently researches the question: How Jewish couples meet and marry. In the 90’s she founded two nonprofit Jewish matchmaking programs, and continues to champion the role of community in helping singles meet. She resides in Jerusalem and Great Neck, New York. 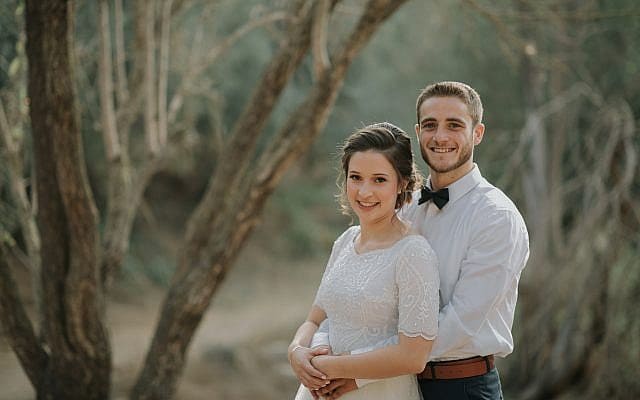